Last year, I was preparing for a talk on extending Aurelia. The talk would look at how Value Converters, Custom Attributes, Custom Elements, and Binding Behaviors can be used to extend Aurelia's binding engine. I was well versed in building the first three, as I expect most experienced Aurelia users would be. The only problem is I didn't know a damned thing about building Binding Behaviors. Sure, I knew how to use debounce or updateTrigger and all of the other binding behaviors that ship with Aurelia, but I had no clue what it took to build one.

Luckily, I knew just the person to ask about how to build them, and hopefully get a sweet demo of a custom binding behavior: Jeremy Danyow. Jeremy knows more about Aurelia's binding engine than pretty much anyone else (including Rob Eisenberg). So I messaged him and he came back to me with a binding behavior demo that pretty much blew my mind. It allowed the user to create a data driven form. The demo itself is runnable here.

Here's a screenshot of the demo running: 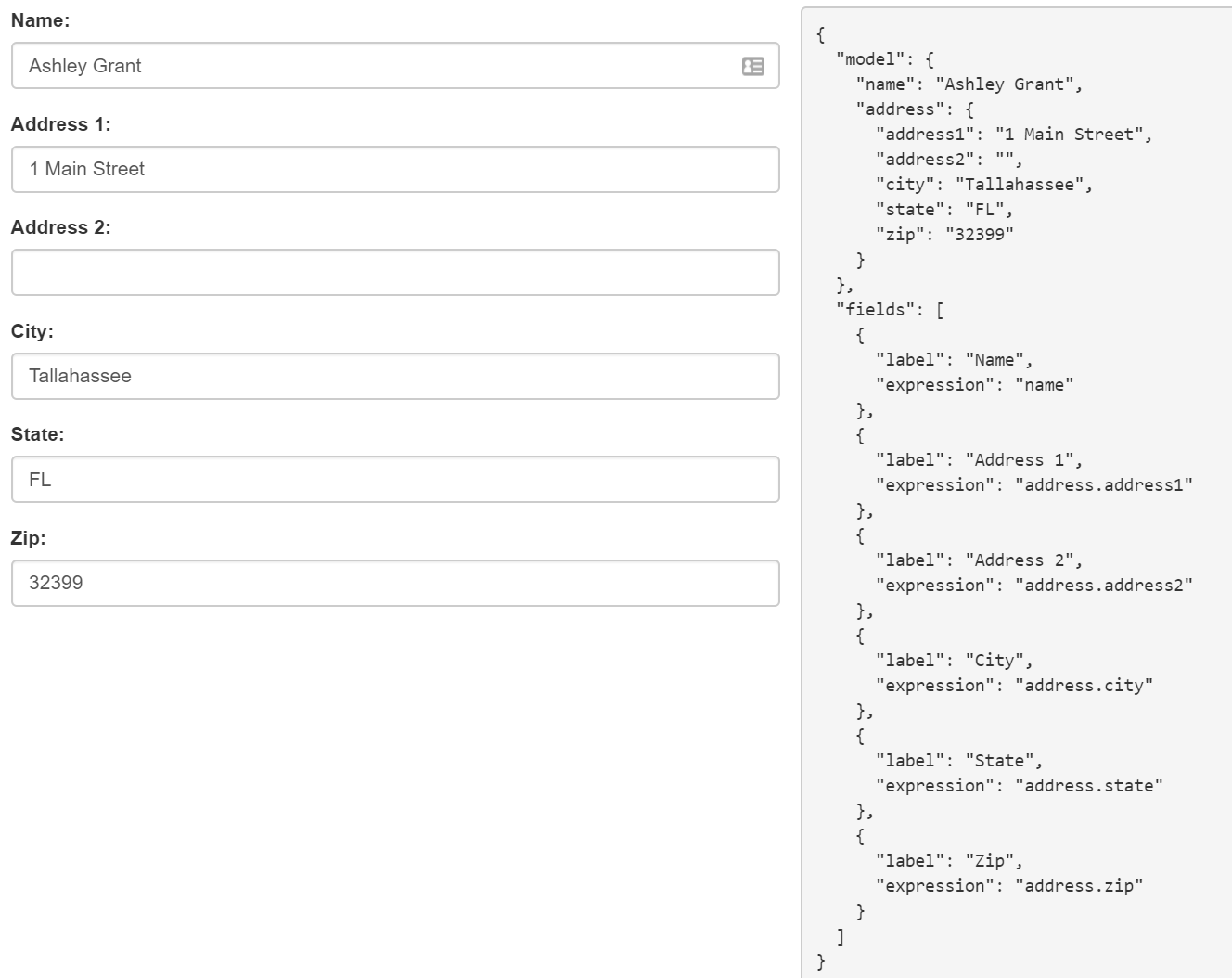 The data driving the application is shown to the right, while the form itself is on the left. The view-model for this page consists solely of the two objects displayed on the left side of the screenshot.
Let's look at the view code that for this page, and you'll see why it blew me away.

Note that on every iteration of the repeater, the input textbox is simply bound to the model object. On its own, this is not very useful, but with this binding behavior, we are able to change the binding expression from, for example, model to model.name.

As you might imagine, this could be extremely powerful for building forms over data UIs dynamically. But for me the interesting part is how this demo shows the power of Aurelia binding behaviors, and Aurelia's binding engine. It also showed me how relatively easy it can be to suddenly look like an Aurelia wizard, something I'll explore in part two of this blog post.

But for now, I want to look at the source code for this binding behavior.

DynamicExpressionBindingBehavior is the binding behavior itself, and is actually relatively simple code. Let's take a look:

The class has an instance of the Aurelia's binding engine's Parser class injected in to it. The bind function is the callback that Aurelia calls when binding occurs on the binding expression in the template.

The bind function takes three parameters. The first two parameters are passed to the function by Aurelia. When implementing a custom binding behavior, you can add an arbitrary number of custom parameters, which will be passed to your bind callback in order. This binding behavior only takes one parameter, rawExpression. This parameter will be equal to the field.expression property.

The first thing the code does is parse this expression. This gives us an expression that Aurelia can work with. Next this expression is passed to the rebaseExpression function along with the original binding's source expression, which will always be model in the view for this demo. Conceptually, what the rebaseExpression function does is convert value.bind="model & dynamicExpression:field.expression" where field.expression might equal address.city to value.bind="model.address.city". We'll look at how it does this in a moment.

The binding behavior itself is the simple part of this code, but we'll see in Part 2 of this blog post, that doesn't stop us from using these lessons learned to do powerful things.

The complicated, nitty gritty, "only a few people in the world know Aurelia's binding engine well enough to accomplish this" stuff happens in expression-rebaser.js. Even though what's happening requires intimate knowledge of Aurelia, the code itself ends up being rather succinct.

The ExpressionRebaser class extends the ExpressionCloner class built in to Aurelia. This means it only needs to override a couple of methods to implement some really complex stuff. We create an isntance of the class, passing the base expression (the original binding expression). The three other functions are used by Aurelia to actually do the rebasing of the expression. In the case of address.city to model.address.city, visitAccessScope is used. The parsed expression for address.city is told to "accept" the new "visitor", which is the ExpressionRebaser instance. This results in the visitAccessScope function being called, and a new AccessMember instance is created. The AccessMember class represents "an expression that accesses a property on an object" (quoting the Aurelia docs). Its constructor takes two parameters, an Expression object, which will be the original model expression in this case, and a name string, which represents the property name. In the case of address.name, the access.name property will be address. Aurelia chains together these simple binding expressions when it parses the binding expression, so the the final binding expression that is returned by expression.accept will look like this: 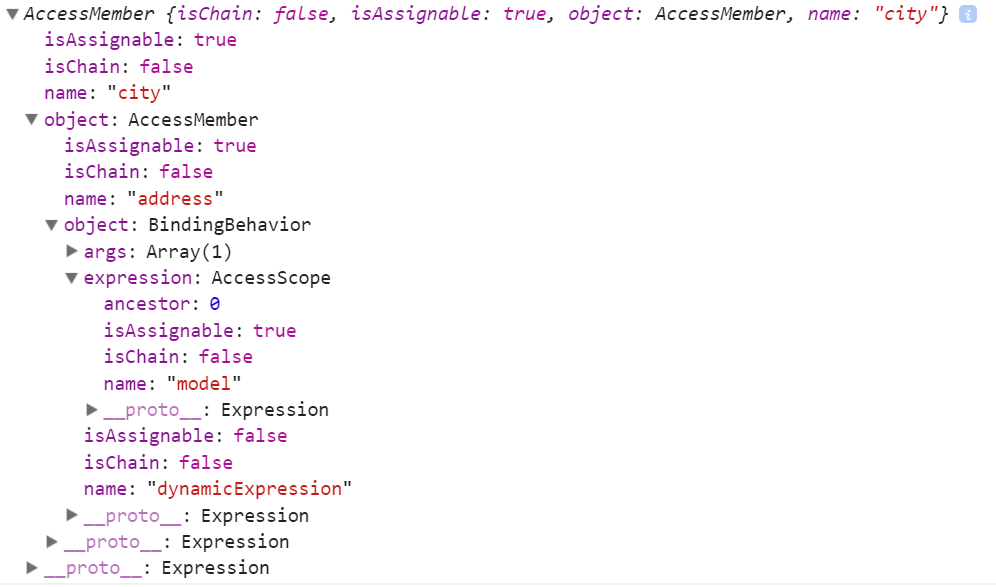 You can see how the model.address.city binding expression gets built up by Aurelia in to the "Abstract Syntax Tree". The nice thing for us building the binding behavior is that we can lean on Aurelia's binding engine and don't need to reinvent the wheel, because I don't know about you, but I wouldn't know an AST from a hole in the ground.

If you're still wanting more information on how the expression rebasing stuff works, I encourage you to read the Aurelia documentation written by Jeremy Danyow here.

In Part One of this blog post, we've looked at a rather complex, though also simple to implement, binding behavior that gives us the ability to build data-driven forms. In Part Two, we'll take some of the stuff learned in this post (especially getting Aurelia to parse binding expressions for us) and put it to work in a custom attribute that can dynamically create or rewrite binding expressions on the element it is attached to.

As my teenage niece would say: "Get excited!"

Last week, we looked at some hardcore Aurelia code written by Jeremy Danyow that helps create data-driven forms. This week, we'll check out how I used what I learned from Jeremy's code to answer a Stack Overflow question from my fellow Aurelia Core Team

Introduction One of the great things about Aurelia is how it simply gets out of your way and allows you to focus on your own code. Another thing that's great about Aurelia is that it makes it easy to write your very own Todo